Enter your name + email to receive instant access to the first chapter of Stacey's book, Douchebags to Diamonds.

You'll also be signed up to receive future emails and gifts from Stacey Dewald.

How do you release years of shame? You give it a voice.

This is my story…

We all have patterns that appear again and again in our lives, patterns that we don’t like, and that leave us feeling insecure, powerless, defeated, and even inadequate at times.

We tend to blame these patterns on an external source, such as the person we’re dating, or our spouse, our ex, our parents, our boss, our friends, or even our children.

But the truth is, we created these patterns ourselves, and we’re the only ones who can break them.

For me, the pattern I was stuck in for years was toxic relationships.

And I mean toxic. (To be fair, the men I dated weren’t all douchebags, but I had a bad habit of pushing the “nice guys” away.)

To give you an idea, here are a few examples of my past dating experiences:

I wasn’t kidding when I said toxic relationships—I couldn’t make this stuff up. To be honest, I’m quite surprised I haven’t been a guest on Dateline.

I felt like finding true love was a lost cause for me, and I was convinced I was destined to be a lonely old cat lady.

I couldn’t understand why I was attracting these types of relationships, and I just kept asking myself, “Why is this happening to me?!”

The problem was that after each relationship I found myself sinking further and further down into a dark hole filled with embarrassment, blame, anger, resentment, and a shit ton of sadness.

I was at the lowest point of my life and silently suffering.

I did my best to appear strong but on the inside I felt so alone, broken, and helpless.

Until one day the emotional pain got so bad and my frustration with life was so heavy.

But thankfully my motivation to change my life was crystal clear: my young daughter.

I knew I was leading by example, and the example I was providing wasn’t one I was proud of.

The last thing I wanted was for her to wake up a hot mess like I was, or—God forbid—find herself in the same pattern of relationships I suffered through, thinking that she wasn’t worthy of a man’s love and respect.

I came home after that final breakup and looked at my daughter as she sat on her bed. I made myself a promise that I would do whatever work on myself I needed to do in order to be the best role model I could be for her.

I gave her life, but I believe she saved mine.

That evening I started praying, HARD. I prayed for a miracle. I prayed for any form of help that would pull me out of the darkness. I was so desperate for change, and at that point I had no other choice than to trust that my prayers were being heard and help was on the way.

Shortly after that, a friend told me about a counselor who focused on why you attract certain things and people in your life. And, even though I had already gone to years of counseling and therapy, I immediately contacted him and scheduled a session.

In our first visit, I explained my string of heartbreaks and how I was pretty sure I was destined to be single for the rest of my life…until he stopped me mid-sentence and gently said,

“Stacey, I hear you, but you’re not a victim. Yes, you’ve been handed a few bad eggs, but maybe all of this happened to you for a reason…if you’re open to seeing it that way.”

(In my book, Douchebags to Diamonds, I tell you what I really wanted to say to him. But…I didn’t. Something told me to keep my mouth shut and just listen.)

He went on to say, “We can touch on your past, but I don’t want to camp out there. I want to move you forward so you can live the life you truly desire.”

The best word to describe how I felt in that moment is…hope.

Hope that I wasn’t broken.

Hope that I could be the mom I always wanted to be.

Hope that I’d be able to live a life that I could be proud of.

Hope that the emotional pain I was feeling was temporary.

From that day on, I decided the shit show was over and started taking full responsibility for my life.

Here are some changes I made:

I learned a lot from all that self-reflection.

Here are some of the high points:

What happened after I gained all this clarity was nothing short of a miracle.

I’ll tell you the whole love story in my book, Douchebags to Diamonds, but essentially, less than four months after adopting this new way of being, I attracted a handsome, kind-hearted, funny, honest, successful, and loyal man who eventually became my husband in 2013.

The transformation that I experienced was so powerful that it inspired me to become a Certified Life Coach in 2015, and a Certified Reiki Practitioner in 2018.

Today, I specialize in helping women heal their hearts, feel more in charge of their love life, and get them out of the rinse-and-repeat douchebag cycle—for good!

Want to see how I can help you take control of your love life? 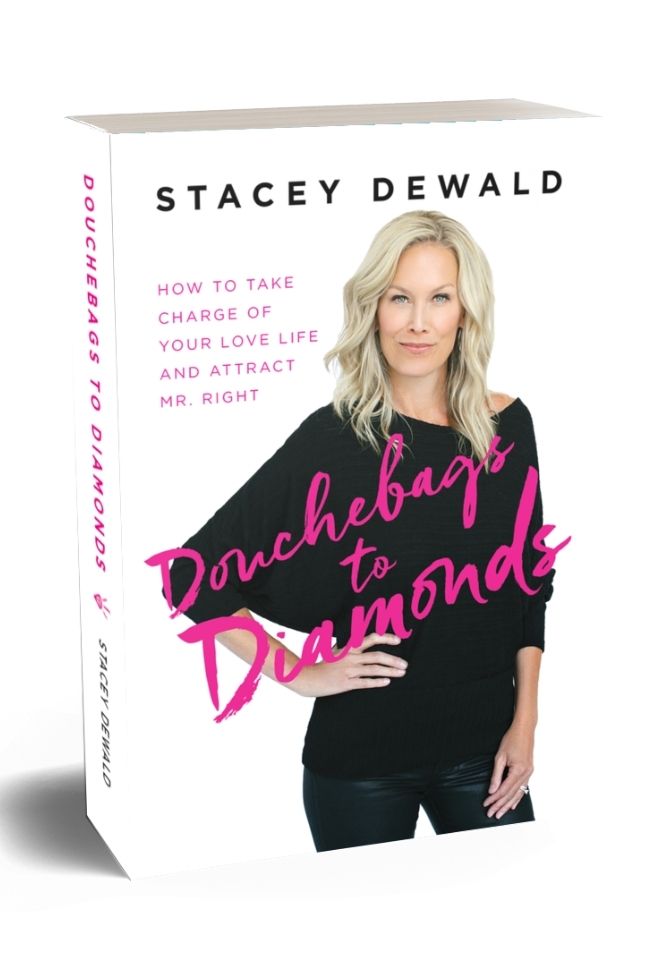 How to Take Charge of Your Love Life and Attract Mr. Right

Here’s a little blurb to intrigue your interest…

Douchebags to Diamonds™ is a self-help book for women who want to heal a broken heart, take charge of their love life, and attract their Mr. Right.

In this honest, tell-it-like-it-is book, author and entrepreneur Stacey Dewald explores the raw truth of her most painful relationships, delving into how she became stuck in a cycle of looking for love in all the wrong places, and she shares how she broke free from this pattern, revealing an empowering journey of doing the hard work to release old pain and, ultimately, attract the man of her dreams.

Ready to learn more about how we can work together?